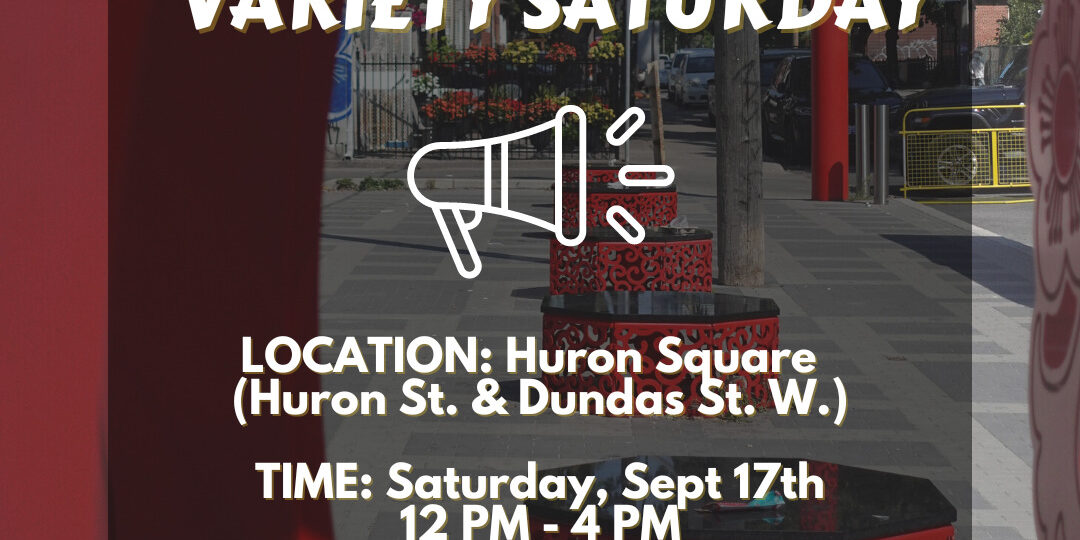 Join us for our “Huron Square Variety Saturday” on Saturday, September 17 from 12pm to 4pm! This event is perfect or guests of all ages! Enjoy live performances and many other fun activities with your friends, family and loved ones in Huron Square in Toronto Chinatown, located on Huron Street and Dundas Street West.

Enter our Lucky Draw during intermission by spending over $5 at any business in within our Toronto Chinatown BIA boundaries!

About Aaron Seunarine: Aaron is a professional Drummer/Percussionist/Steel Pan player, a Producer and beat maker.  He plays for the Toronto Raptors Bucket Drumming Group (Six Stix,  listen to and play all genres of music, looking to expand and get his music to the masses!

About MCAO: The Mississauga Chinese Arts Organization (MCAO) is a non-profit performing arts organization dedicated to the presentation and production of a full spectrum of Chinese performing arts events. It is also committed to providing opportunities for community members to practice and develop their artistic skills through various training and performing programs.

Since it was first founded in 2005, the MCAO has collaborated with many organizations/ associations and successfully presented more than 100 live performances and variety shows at major society, corporate and community venues all over the city of Mississauga and the surrounding areas, and gained a superb reputation for their amazing Chinese traditional dances, folk music and unequalled entertainment.

The Magic of Roberto

Show: 1 hour live magic performances for guests of all ages

About Magic Roberto: The Magic of Roberto is a trusted name in the community for over 20 years. Having performed at thousands of events, birthday parties, school assemblies, day care events, public libraries, banquet halls, corporate functions, community centres and festivals combined, Roberto will take your audience on an unforgettable journey of wonder and the impossible!

Roberto’s achievements start with volunteer teaching for three years at David Copperfield’s Project Magic Program. Appearances on CBC’s program “Jonovision” where Roberto showcased his talents in a competition in front of a live studio audience. Roberto was awarded with first prize on national television. Roberto was also one of the lead performers at Toronto’s Illusionarium. Roberto’s televised appearances have been seen on European, Asian, Australian and the North/South American continents.

​Roberto has also been seen on Rogers Cable and CP24 Breakfast Television. He has also been  featured on The Discovery Channel and Animal Planet (Working Animals), episode “THE MAGICIANS”.

About Carrie Chesnutt: Carrie Chesnutt has had a dual career as saxophone and flute sideman and recording artist, as well as a One Woman cabaret dynamo.

Carrie has performed at Canada’s Walk Of Fame, played with Late Night With David Lettermans’ Paul Shaffer, blues legend Paul Butterfield, English songwriter and icon Tom Robinson, Mary Wilson of the Supremes, entertained at private parties for Rick Moranis and Tom Hanks, and opened for the one and only Phyllis Diller.

Carrie has been a core member of Toronto Woman’s Blues Revue held at Massey Hal for the last 20 years, both as a saxophonist and vocalist, working and touring Canada with Canada’s finest, such as Rita Chiarelli, Shakura S’Aida, KellyLee Evans, Jackie Richardson, Sass Jordan, Jully Black, Carole Pope and more in the jazz department, she is a founding member of the “Women With Horns”, along with Colleen Allen, a pioneering “women in jazz” group.

Carries lively and funny one woman show, “A Woman and her Horn” and “Plan C” ran a successful 8 seasons at “The Palm” in Puerto Vallarta, Mexico, toured Costa Rica twice and workshopped at Soulo theater.